What's on your mind?

I created a 3D animation of a quick space battle scene. I used an uncommon tie variant (tie Striker). As well as a star destroyer carrier concept. It was done in Blender 3D. 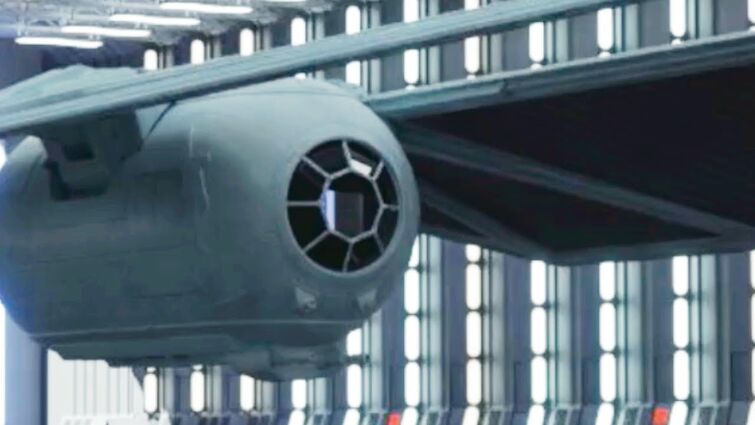 Hello guys! You can call me Hunter, and I am a HUGE Star Wars fan! It all started when I was a little girl, and my mom cultured me with a bunch of Star Wars movies that she loves, also. To this day, I am a major Star Wars geek and I love sharing my theories and knowledge with people! I have created and drawn many Star Wars based characters, and love making up my own little stories. My favorite movies are Rogue One and The Empire Strikes back. My favorite character, hands down, is Han Solo. But I also love Ahsoka Tano and Jyn Erso. My lightsaber color is aquamarine, and my lightsaber combat form is II or Makashi. I got to admit....I'm a bit of a nerd. I am super excited to help this site grow, make new friends, and share theories and knowledge with you all! May the force be with you always!

Hey folks, I'm starting a petition to get Disney to put The Mandalorian and their other Star Wars shows on blue ray. I'm not asking for money, only signatures. I'm shooting for 500,000 signatures, so please follow the link below, sign and share it.

Hey folks, I'm starting a petition to get Disney to put The Mandalorian and their other Star Wars shows on blue ray. I'm not asking for money, only signatures. I'm shooting for 500,000 signatures, so please follow the link below, sign and share it.

Luke Skywalker is in The Mandalorian! Yes! But not yay. I think Disney May have missed out on a big chance here. They had mentioned Thrawn earlier in the season. What they could have done is make Ezra Bridger the Jedi, and pave the way for Thrawn to come onto the show. A good ending for season 2 could have been Moff Gideon contacting Thrawn to tell him of his failure. And, by the way, Luke Skywalker has been in so many movies, books, comics, you name it. Over time, it was becoming a staple for Skywalker to be in Star Wars products. And with this, it wasn’t as exciting and shocking to see him in The Mandalorian. The moment I saw the X-Wing, I was like: “Luke Skywalker? Not again.” And characters like Thrawn and Ezra are used so less often, despite also being fan-favorites. Thrawn has only left the books once, and they kinda ruined him. After all, Rebels WAS meant for younger audiences. They couldn’t completely show Thrawn’s genius. But they could in The Mandalorian. And Ezra would be a great way to pave Thrawn’s appearance, as they both were shot into wild space together. Think about it. Luke Skywalker’s appearance was cool, but disappointing compared to what else could have happened.

Just wondering since there has not been activity in monthes

Can anyone identify the patch at the very bottom of this set, the one below the Sith Era symbol? I took the picture at Star Wars: Galaxy's Edge in Disney World in Orlando. I've looked online for hours and can't discover it anywhere. Any help would be greatly appreciated.

I want to hear your ideas!

Hello....I am looking for help on an Internet Communities research paper.  We have been asked to find an online community that we know little about to research and learn.  I chose the Star Wars online community.  I have become facinated by how many people engage in Star Wars and interested in the many ways and reasons why.  Full disclosure, however, I am not nearly as familiar with Star Wars as everyone on this discussion board appear to be, but I did watch Episodes IV-VII to get acquainted with characters.  My research would basically be looking for different perspectives to some questions, maybe find better answers to better questions than I have:) Does anyone from this site think that I could accomplish a research paper using this site? If I can get a few people to help out, maybe we can develop our own discussion board, so not to upset the general group?  Not sure how all this works, again all new at this, so please be patient. Thanks in advance to anyone who could help me with some questions!

(edited by A Fandom user)
Ezra and Sabine together opinions?
(edited by XxWILDCATxX)
kixjijwehjkff
(edited by Rlflsrlfls)

While I realise most of the books and other content based around the Star Wars universe is non-canon I really dislike that "The Force Awakens" completely replaces and renders everything else beyond the battle of Endor, in the currently available universe content, useless and obsolete. I thought the film, when thought of as a stand alone movie (or even the start of a stand alone trilogy) was ok. However when you put it into the Star Wars universe as the canon continuation of such an epic story, it really disappoints me! Luke is weakened and portrayed as a coward, the new Sith Lord is an overpowered fool at the same time as being an unconfident self loathing pansy. The biggest annoyance I have is the fact that Disney have basically looked at the content available and gone "no, we're not having that, we're going to change all that and rewrite it our way so everyone knows it's ours now" which I wouldn't mind but they did such a piss poor job of it! I will only think of the new films and content beyond this as an alternative timeline! If Disney had any sense they would have used the already popular and amazing ideas and content available as inspiration at the very least but no they decided to slap all the fans of the books etc in the face!

In the novels, comics and other content available Ben is actually Luke's son and doesn't turn into a Sith, the son of Leia and Han that does turn is called Jacen Solo and his Sith name was Darth Caedus! He was first a hero of the Republic and after was eventually killed by his twin sister Jaina Solo. Luke Skywalker becomes the legend his father was supposed to be, he becomes basically undefeatable eventually but through long trials and training! Leia becomes a Jedi knight herself! There were literally hundreds of avenues for Disney to exploit for this trilogy but they decided to be exactly what they always have been! A greedy selfish American corporation!

They could have used the return of emperor palpatine for this trilogy his eventual defeat at the hands of Luke would have been the perfect end to it!

Lightsaber's colors depend on the personality of the Jedi's skills. For instance, green means that the Jedi is more focused on negotiations skills than combat; a Jedi with a blue lightsaber focuses more of their  skills in combat; and a red lightsaber is a synthetic crystal that sith use.  The purple saber means that the wielder that has both the dark side and the light side present in his/her actions.

The parts dealer at the village looks remarkably like Liam, and we have been told there is a secret actor returning in

I honestly HATE Luke Skywalker. He's the biggest disappointment when it comes to "Jedi Knights' and I would expect a lot more from the padawan of Obi-wan and SON of Anakin Skywalker AKA Darth Vader.

17 Posts
Episode VII and Beyond