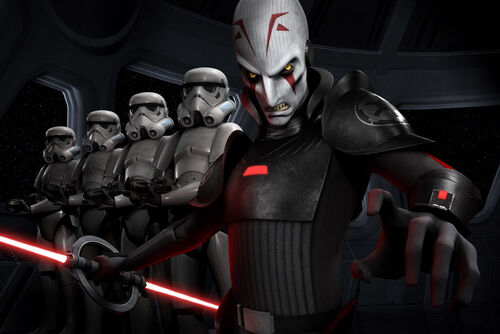 Have you heard the big news? A new villain for Star Wars Rebels was announced at New York Comic-Con! The villain is called the Inquisitor, an agent of the Empire tasked by Darth Vader to hunt down the remaining Jedi Knights. This new villain will be a source of conflict for the Rebel heroes, who will make up the main cast of the series. You can see an image of the Inquisitor at the top of this thread.

So far, we don't know much beyond what this guy looks like. He's flanked by stormtroopers, who are not the 501st, and uses a strange-looking double-bladed lightsaber, similar to Darth Maul's but with a shorter hilt. He also looks like the species from Utapau that was scene in Star Wars Episode III: Revenge of the Sith, but at the same time he also looks like "The Son" from the three-part Mortis episode on Star Wars: The Clone Wars. His armor also looks somewhat similar to Darth Vader's.

What do you think about the character so far?

yeah agreed he doesn't have the original looks that Vader, the Stormtroopers, Maul, Grevious, or the Fetts had (which were the best looking in my opinion) as for his mission he's probably part of the inquisitorius and one of the leader of the rebels is a Jedi (probs Ashoka) which I would want to see him be a more of a tortuerer type character (though I doubt they will in a kids show)

(edited by KnightmareS-C075)
1
The Son and the Inquisitor look an awful lot alike. Anyone else notice?
(edited by A Fandom user)
0

Yeah, I noticed that too.

Seems cool, and very reminiscent of Inquisitor Hydra, but I look forward to Kallus more than him.

Well Dave Filoni did say that the Inquisitor would be a fear-evoking threat to the rebels and isn't just a "gets beat every episode-but is still supposed to be a threat" kind of villain. I am interested to see where they go with this and hope that this makes the Inquisitor unique and not just another Sam Witwer-type villain.

A far cry from Star Wars: The Clone Wars, where the only Separatist victories I remember were against Nightsisters or involving Savage Opress. Filoni seems to take Prince Zuko more seriously than Grievous or battle droids. I'm looking forward to a serious and cold villain.

Its definitely the son! Haters gonna hate him because he killed Ahsoka Tano!!! !@#$% you Inquisitor!!!

(edited by A Fandom user)
0

It's definitely not the Son. The Inquisitor is a Pau'an from Utapau, whereas the Son was a different kind of entity. They have similar facial colors, but the Son is definitely not a Pau'an.

What do you think?