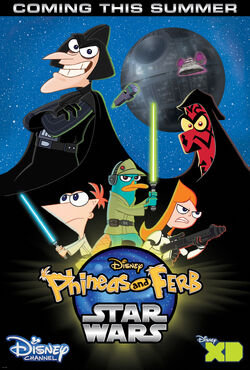 "May The "Ferb" Be With You and with all of us who for decades have dreamt of a chance to work with the great characters and stories of Star Wars."
―Dan Povenmire[src]

MAY THE FERB BE WITH YOU
On the Desert planet of Tatooine
lived two happy young moisture
farmers, who had absolutely
no plans of leaving or getting
involved in any kind of
intergalactic shenanigans.

Unbeknownst to them the Galactic
Empire had recently finished
constructing its ultimate weapon,
the DEATH STAR.

Meanwhile, having learned the
whereabouts of the Death Star's
plans, the rebels send their best
platypus agent to obtain them, in
hopes of finding a weakness.

And none of this is canon, so just relax.

A long time ago, in a galaxy far, far away in summer, Phineas and Ferb are living happily on Tatooine , just one moisture farm over from Luke Skywalker. They find themselves thrust into a Global Rebellion when the plans for blowing up the Death Star accidentally fall into their hands. Now that fate has suddenly pulled them into the fight for freedom, they must go in search of a pilot who can take them to the Rebels so they can hand over the plans. Complicating matters, Candace -- the boys' sister -- has a Stormtrooper-like intent on "busting rebels" who chase Phineas and Ferb across the galaxy in hopes of retrieving the Death Star plans.

Meanwhile, back on the Death Star, Dr. Darth Enshmirtz, a low level Darth, has created a Force-powered "Sith-inator" that he plans to use against the Rebel Alliance. Agent P, working undercover for the Rebellion, is dispatched to stop him, but quickly gets trapped in carbonite. Then, things take a startling turn when Ferb is accidentally hit by the full blast of Dr. Darth Enshmirtz's "inator" and becomes an evil Sith.

Retrieved from "https://starwarsfans.fandom.com/wiki/Phineas_and_Ferb:_Star_Wars?oldid=65381"
Community content is available under CC-BY-SA unless otherwise noted.