"The Saga is Complete"
―Revenge of the Sith tagline[src]

In the overall arc of the Star Wars Saga, the prequels show the origins of Anakin Skywalker and follow him from becoming a Jedi Padawan to finally succumbing to the dark side and becoming Darth Vader. In the backdrop is the Invasion of Naboo and the Clone Wars, engineered by Palpatine to become Supreme Chancellor and reorganize the Galactic Republic into the Galactic Empire. Other characters include Jedi Knight and Anakin's master, Obi-Wan Kenobi; Senator of Naboo and Anakin's wife, Padmé Amidala; Jedi Master Qui-Gon Jinn; and various other Jedi and Sith characters.

Critically, the prequels were not as well received as the original trilogy, with Episodes I, II, and III receiving 57%, 67%, and 80%, respectively, on Rotten Tomatoes. This has made it a source of controversy amongst Star Wars fans, many liking it and many others not liking it. Nonetheless, the trilogy as a whole generated well over $1 billion at the box office. 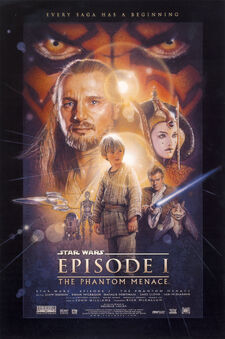 The film is set 32 years before the original Star Wars and centers around a war on the backwater planet of Naboo, which was invaded by the Trade Federation after a dispute in the Galactic Republic Senate. The plot also deals with the discovery of the Chosen One and future Darth Vader, nine year old Anakin Skywalker, on the desert planet of Tatooine. In the backdrop, the Dark Lords of the Sith return after having been believed extinct for a thousand years.

The Phantom Menace was originally released in 1999. Though it was a major box office success, with an adjusted gross of over $1 billion between its initial release and 2012 re-release, it received mix critical reaction. The film currently has a score of 57%, "rotten," on Rotten Tomatoes.[1] Reaction amongst Star Wars fans has also been divided; The Phantom Menace appealed to a new generation of Star Wars fans, but older fans who grew up with the original trilogy were often less receptive to the film.

Attack of the Clones 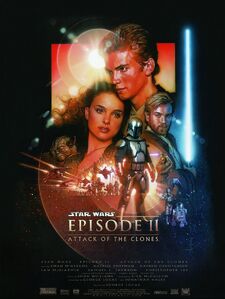 Star Wars Episode II: Attack of the Clones is, chronologically, the second chapter of the Star Wars film saga, and the fifth released into theaters. It is the second film of the prequel trilogy. The film was written and directed by Star Wars creator George Lucas, and produced by Rick McCallum.

The film is set 10 years after the events of Star Wars Episode I: The Phantom Menace and 22 years before Star Wars Episode IV: A New Hope. The plot centers around growing discontent in the galaxy between the Galactic Republic and a group of Separatists who challenge the Republic's rule. The plot also deals with the growing love between Jedi Padawan Anakin Skywalker and Senator Padmé Amidala of Naboo, who must work together to survive in a galaxy that will soon be swept up in the destructive Clone Wars.

Attack of the Clones, released in 2002, was the first film in cinematic history to be shot completely on a digital system. The film was a box office success, making nearly $650 million at the box office, and was received better than its predecessor. The film currently holds a 67% "fresh" rating on Rotten Tomatoes.[2] Nonetheless, like its predecessor, the reaction amongst Star Wars fans was divided.

Revenge of the Sith 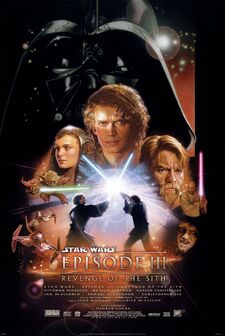 Star Wars Episode III: Revenge of the Sith is, chronologically, the third chapter of the Star Wars film saga, and the sixth released into theaters. It was originally believed to be the last, prior to the announcement of Star Wars Episode VII and the rest of the sequel trilogy. The film was written and directed by Star Wars creator George Lucas, and produced by Rick McCallum.

The film is set three years after the events of Star Wars Episode II: Attack of the Clones and 19 years before Star Wars Episode IV: A New Hope. The plot centers around the end of the Clone Wars and the final days of the Galactic Republic, before it is transformed into the Galactic Empire. The film also centers on Anakin Skywalker's fall to the dark side, as he becomes the Sith Lord Darth Vader and helps destroy the Jedi Order.

Revenge of the Sith, released in 2005, was the first film in the series to earn a PG-13 rating, the rest having been PG. It was a box office success, making $848 million at the box office. Critically, the film was the most well-received of the prequel trilogy and the third highest rated of the entire Star Wars series to date. It currently holds an 80% "fresh" rating on Rotten Tomatoes.