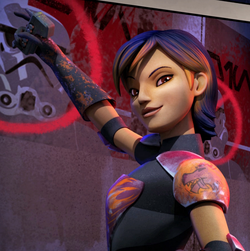 =Star Wars Rebels[1] (voiced by Tiya Sircar) is a main character in the upcoming animated television series Star Wars Rebels, set to debut in summer/fall 2014. Sabine is a weapons expert and enjoys blowing things up, with a certain flair because she is also an artistic character, one of the first in Star Wars who is expressively creative through art. That creativity shows in the color of her hair, how she paints her armor and her bunk aboard the Ghost, and how she leaves graffiti behind when the crew attacks an Imperial target—a calling card, so the Galactic Empire knows the rebels have attacked. She is also a Mandalorian, with a personality described as sassy, spunky, and feisty.[1]

Retrieved from "https://starwarsfans.fandom.com/wiki/Sabine_Wren?oldid=70145"
Community content is available under CC-BY-SA unless otherwise noted.