"But beware of the dark side. Anger, fear, aggression; the dark side of the Force are they. If once you start down the dark path, forever will it dominate your destiny, consume you it will, as it did Obi-Wan's apprentice.”
”Is the dark side stronger?”
”Quicker, easier, more seductive.”
”But how am I to know the good side from the bad?”
”You will know..."
―Yoda and Luke Skywalker[src]

Star Wars: The Dark Empire is an animated Star Wars fan TV series that aired for three seasons that broadcast on ABC. The show, which was launched in 1991 with Dark Horse Comics, written by Tom Veitch and Cam Kennedy, was created and produced by Nelvana on behalf of Lucasfilm, originally with its sister series Droids. As Clive A. Smith served as the supervising director, the series takes place after Star Wars Episode VI: Return of the Jedi and its sequel trilogy. All three TV seasons detailed the resurrection of Emperor Palpatine in clone bodies. 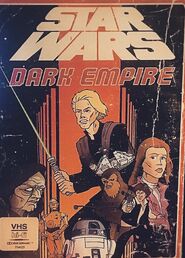 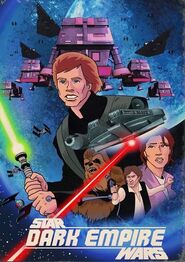 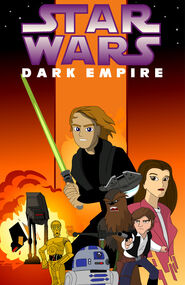 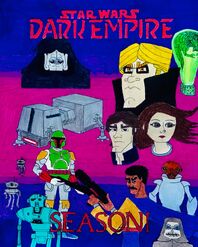 Season 1 poster (Alternate)
Add a photo to this gallery

Retrieved from "https://starwarsfans.fandom.com/wiki/Star_Wars:_Dark_Empire?oldid=73952"
Community content is available under CC-BY-SA unless otherwise noted.