Star Wars: Versus is a fan film released on 5 November, 2005, created by fans of George Lucas's Star Wars saga.

Versus is noteworthy for an apocalyptic saber battle with great dramatic intensity, in a new credible style.

It takes place between Attack of the Clones and Revenge of the Sith. The film intended to show a battle between duty and desire to revenge on the backdrop of the battle for life.

The Sith Lord is glad to find an another victim.

A duel between Darius and Sith

A duel between Darius and Sith

Duel between Kamee and Sith.
Add a photo to this gallery

A Word from Nicolas Santini [Director of "Versus"][edit | edit source]

When I started this project, I had two goals. The first was to film an apocalyptic saber battle with great dramatic intensity, in a new credible style. The second was to portray another battle: the test of a young Jedi’s conscience against the dark side - reason against emotion. Versus was born out of the desire to incorporate these two ideas.

Practically I believe that I formed the smallest possible team needed for a film of this “size” (approximately 350 shots). The team consisted of three people, including myself. With my friends and collaborators Nicolas Brunet and David Acou, we assumed multiple roles in both filming and post-production. You surely noticed they performed almost all of technical jobs, each one in his speciality, mainly make-up and special effects for Nicolas, camera and sound effects for David. 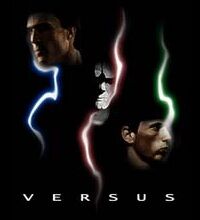 About shorter participations, I thank Sylvain Lacoste for his experience with saber which saved us precious time and Audrey Benjamin for fashioning our costumes so quickly.

For those of you who enjoyed this movie, and who would like to know what will happen to Darius after this terrible end, know that the story is not finished. I would even say that Darius gets into deeper trouble. On his way: spaceships, battalions of clones, a sith squad, droids, members of the rebellion… and incredible new powers… May the patience be with you!

"Versus II" is near completion. Creators are sure, that it will be the most ambitious fanfilm sequel in the fanfilm universe.[1]

Retrieved from "https://starwarsfans.fandom.com/wiki/Star_Wars:_Versus?oldid=61497"
Community content is available under CC-BY-SA unless otherwise noted.