"The Saga is Complete"
―Tagline[src]

Star Wars Episode III: Revenge of the Sith is, chronologically, the third chapter of the Star Wars film saga, and the sixth released into theaters. It was originally believed to be the last, prior to the announcement of Star Wars Episode VII and the rest of the sequel trilogy. The film was written and directed by Star Wars creator George Lucas, and produced by Rick McCallum.

The film is set three years after the events of Star Wars Episode II: Attack of the Clones and 19 years before Star Wars Episode IV: A New Hope. The plot centers around the end of the Clone Wars and the final days of the Galactic Republic, before it is transformed into the Galactic Empire. The film also centers on Anakin Skywalker's fall to the dark side, as he becomes the Sith Lord Darth Vader and helps destroy the Jedi Order.

Revenge of the Sith, released in 2005, was the first film in the series to earn a PG-13 rating, the rest having been PG. It was a box office success, making $848 million at the box office. Critically, the film was the most well-received of the prequel trilogy and the third highest rated of the entire Star Wars series to date. It currently holds an 80% "fresh" rating on Rotten Tomatoes. 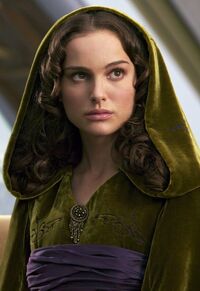 "So this is how liberty dies, with thunderous applause."
―Padmé Amidala, while watching the formation of the Galactic Empire[src]

Padmé Amidala is the Senator of Naboo and the secret wife of Jedi Knight Anakin Skywalker. She is pregnant with Anakin's twins, though she does not know that there are two babies. When Anakin returns from the Clone Wars, he and Padmé try to resume a normal life together, but Anakin is haunted by dreams that Padmé will die giving birth. Padmé tries to reassure him that they are just dreams and that he has nothing to worry about, but his fear drives him into the hands of Supreme Chancellor Palpatine, secretly the Dark Lord of the Sith. Tempted by the promise that the dark side can save Padmé, Anakin falls to the dark side and becomes Darth Vader, the apprentice of Darth Sidious.

Vader briefly confides in Padmé after his fall, and she initially believes that he is trying to do what is best for the Galactic Republic, but she begins to realize the truth when she attends a Senate session where Palpatine declares himself Emperor of a new Galactic Empire. Shortly thereafter, Obi-Wan Kenobi tells Padmé that Vader assaulted the Jedi Temple and killed numerous Jedi, including children. Believing that there is still good in him, Padmé follows Vader to Mustafar to plead with him to stop what he is doing. She tries to do so before Obi-Wan arrives, angering Vader who believes that Padmé led Obi-Wan there to kill him. Padmé is knocked unconscious by Vader after he chokes her using the Force.

Obi-Wan goes on to fight Vader and leaves him to die on the shores of a lava river, but Vader survives albeit burned alive. Obi-Wan takes the wounded Padmé to Polis Massa, where they are met by Yoda and Senator Bail Organa. The injured Padmé gives birth to twins, Luke and Leia, but loses the will to live. Padmé dies as Obi-Wan, while holding Luke, looks on, but not before she tells Obi-Wan that there is still good in Vader. Obi-Wan takes Luke to Tatooine to be raised by Vader's step-brother, Owen Lars, and Lars' wife, while Organa takes Leia to Alderaan to raise her as his own. Padmé's body is brought back to Naboo, where she is given a state funeral.

In deleted yet canon scenes, Padmé was a member of a group of Senators who opposed the draconian measures being taken by Chancellor Palpatine. This group was the early stages of the Rebel Alliance as portrayed in the original Star Wars trilogy. 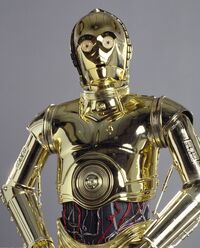 C-3PO is a protocol droid in the service of Senator Padmé Amidala. He assists her with matters of diplomatic protocol, and is present throughout the tumultuous final days of the Galactic Republic and the rise of Darth Vader. After Anakin Skywalker, his maker, falls to the dark side and becomes Darth Vader, the normally fearful C-3PO remarks that the situation makes him feel helpless. Nonetheless, when Padmé follows Vader to Mustafar and is injured during the confrontation between Vader and Obi-Wan Kenobi, 3PO is the one to rescue her, lifting her unconscious body and bringing it aboard her ship.

After Vader is left to burn alive by Obi-Wan, the Jedi Master flies Padmé's ship to Polis Massa, where Padmé dies after delivering her twins, Luke and Leia. With Padmé dead, 3PO comes into the service of Senator Bail Organa of Alderaan, who orders that 3PO's memory be wiped so as to preserve the secret that Darth Vader was Anakin Skywalker and what truly happened during the last days of the Old Republic. 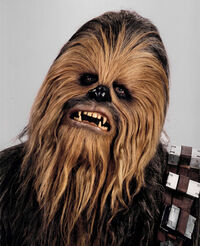 "Goodbye, Chewbacca. Miss you, I will."
―Yoda[src]

Chewbacca is a Wookiee warrior who serves alongside his fellow Wookiee Tarfful, as well as Grand Master Yoda, during the Battle of Kashyyyk, one if the final battles of the Clone Wars. Together, they coordinate the Republic forces in the fight against the Separatist invasion force. Chewbacca helps oversee the battle from a tower high above the battlefield, where he can watch the entire confrontation between the Republic and the battle droid army.

During the battle, Emperor Palpatine issues Order 66, a command for all clone troopers to kill their Jedi commanders. Two clone troopers who are with Chewbacca and the others attempt to kill Yoda, but Yoda strikes them down before they can. With the Jedi Master's life in danger, Chewbacca and Tarfful lead Yoda to a small ship far away from the battlefield and the clones, allowing the Jedi to escape from Kashyyyk. 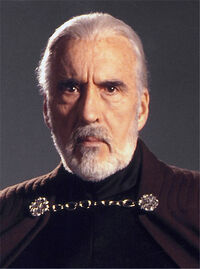 Count Dooku is the political leader of the Separatists and a Sith Lord called Darth Tyranus, apprenticed to Darth Sidious. Together, he and Sidious, secretly Supreme Chancellor Palpatine, have launched and manipulated the Clone Wars in order to form the Galactic Empire. As the film opens, Chancellor Palpatine has allowed himself to be kidnapped by the Separatist General Grievous. The Jedi sent Obi-Wan Kenobi and Anakin Skywalker to rescue the Chancellor aboard the Separatist flagship, Invisible Hand. Once on board, Anakin and Obi-Wan confront Dooku, and Dooku bests Obi-Wan and knocks him unconscious. Dooku takes on Anakin alone, but Anakin defeats him by cutting off both of his hands. On Palpatine's orders, Anakin decapitates Count Dooku.

Sidious' betrayal of Dooku proved that the Count was nothing more than a pawn that Sidious used in the manipulation of the Clone Wars and setting the stage for the formation of the Empire. With Dooku dead, Sidious takes on a new apprentice—Anakin himself, who becomes Darth Vader. 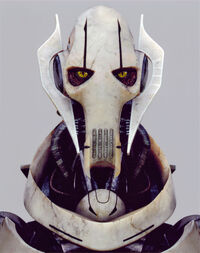 "You fool! I've been trained in your Jedi arts by Count Dooku."
―General Grievous, to Obi-Wan Kenobi[src] 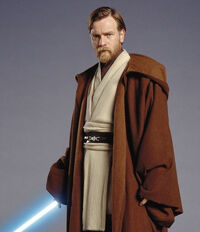 He carries a light blue lightsaber. 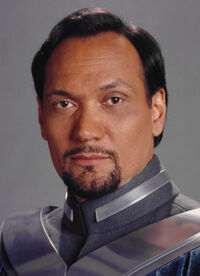 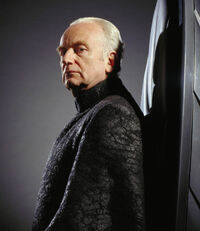 "Once more the Sith will rule the galaxy, and we shall have...peace."
―Darth Sidious, to Darth Vader[src]

He carries a red lightsaber. 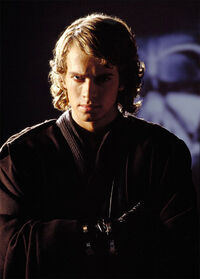 "You were the Chosen One!"
―Obi-Wan Kenobi, after Vader's defeat on Mustafar[src]

Now a Jedi Knight, Anakin continues to struggle with handling his anger and fear. While he and Obi-Wan are saving Chancellor Palpatine from General Grevious, Anakin is goaded into killing Count Dooku by Palpatine himself. Later, on Coruscant, Anakin starts having nigthmares about Padme dying in childbirth. Letting his emotions overtake him, Anakin foolishly vows to save his wife from dying. When counseling from Master Yoda doesn't help him, Anakin turns to Palpatine, who reveals to Anakin he is the second Sith the Jedi have been looking for. Shortly after, Anakin turns to the dark side.

He carries a Light blue lightsaber. 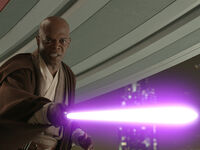 "I am going to end this once and for all!"
―Mace Windu, to Palpatine[src]

He carries a purple lightsaber. 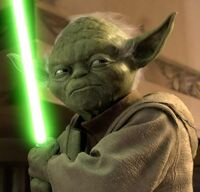 He carries a green lightsaber. 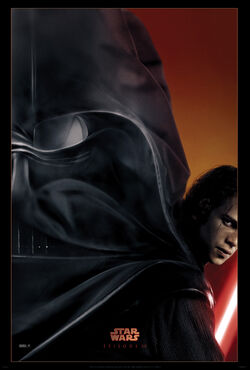 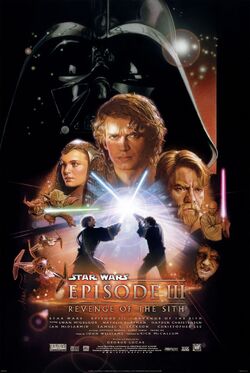 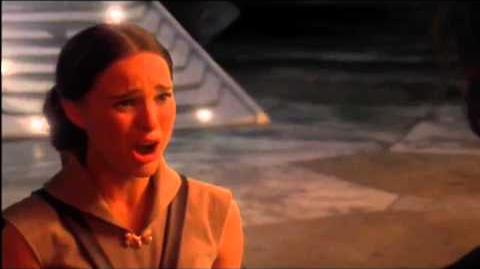