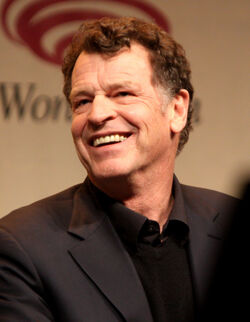 Fringe star John Noble, who portrayed the character Walter Bishop throughout the show's five seasons, has expressed interest in appearing in Star Wars Episode VII. In an interview with IGN, Noble talked about what Star Wars means to him and society, and how he would "love" to do a Star Wars movie.

This isn't the first time Noble's name has been brought up in regards to Episode VII, which will be directed by Fringe co-creator J.J. Abrams. In his interview, Noble said that he was interviewed by a writer from Empire Magazine, and the writer told him that he had created a list of reasons why Abrams "Was the right person to do Star Wars, and one of the reasons he gave was that [Abrams]'d use John Noble." That started a rumor about Noble appearing in the film, to which IGN said that "sometimes these rumors get started" and then they become true, even if they weren't at the time of the rumor. Could the same be true for this rumor?

Retrieved from "https://starwarsfans.fandom.com/wiki/User_blog:Brandon_Rhea/%22Fringe%22_star_would_love_a_Star_Wars_role?oldid=18852"
Community content is available under CC-BY-SA unless otherwise noted.