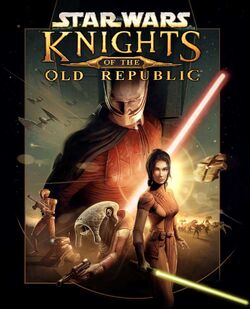 Earlier this year, for its tenth anniversary, the award-winning BioWare RPG, Star Wars: Knights of the Old Republic, was released on iPad for the first time. Now, IGN is reporting that a new update will make the iconic game available on the iPhone (4S or newer) and iPod Touch (fifth generator), and it brings with it improvements to the game's visuals, user interface updates, and controller support. The update also "takes advantage of the hardware’s retina displays, with improved visuals, bloom lighting (on A7 model iOS hardware), shadows, and widescreen support. To support the wider resolution, the user interface has been tweaked to take advantage of the larger screen space."

There's no release date it, but IGN has been told that "it will be here soon." We'll keep you updated.

Retrieved from "https://starwarsfans.fandom.com/wiki/User_blog:Brandon_Rhea/%22Knights_of_the_Old_Republic%22_Headed_to_iPhone_and_iPod?oldid=25878"
Community content is available under CC-BY-SA unless otherwise noted.