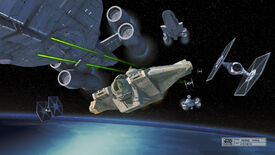 Now that Lucasfilm and Star Wars are owned by The Walt Disney Company, it makes sense that Disney Press, part of Disney Publishing Worldwide, will be releasing Star Wars books. For the first time, we now know what some of those books are.

In addition to a number of untitled novels, Disney Press has updated an online catalog listing to include three books based around the Star Wars Rebels television series, set to debt in 2014. The Rebels books are as follows:

So far, these titles sound like books for younger readers. Given that Lucasfilm has previously said that this show will be directed to all age groups, not just younger audiences like Star Wars: The Clone Wars, we can anticipate that more Rebels books, such as novels, will be released as well. These are simply the only books that Disney Press has listed so far. They are all listed with a release date of August 5, 2014.

Thanks to Knights' Archive for pointing this out. You can see the product catalog listing here.

Are you excited for Star Wars Rebels books? Let us know in the comments below!

Retrieved from "https://starwarsfans.fandom.com/wiki/User_blog:Brandon_Rhea/%22Star_Wars_Rebels%22_Books_Coming_Next_August?oldid=23288"
Community content is available under CC-BY-SA unless otherwise noted.