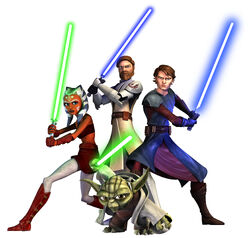 Good things come to those who wait. Star Wars: The Clone Wars, the animated series produced by George Lucas which just ended its five-season run in March, has taken home two Daytime Emmy Awards. This is Lucas' first Emmy Award as well.

The Star Wars series won Outstanding Special Animated Program, an award that was presented by none other than Princess Leia herself, Carrie Fisher—so you might imagine that the winner was pretty clear once she stepped out on stage. On hand to accept the award were Lucas and supervising director Dave Filoni, as well as other members of the production team. Accepting the award, Lucas said that he'd first like to thank the Academy for including animation in the first place, joking that animators have "pulled ourselves up from the outer reaches of television."

Lucas went on to say that "This is especially important to me... This is my first Emmy, the second award I've ever won." He went on to thank Filoni and the other producers, writers, actors, and everyone else involved with the series. Ultimately, he said "we're very, very happy."

You can watch the full video of Carrie Fisher presenting and George Lucas accepting the award here:

That's not the only Daytime Emmy that The Clone Wars won, though. David Tennant, best known for his role as the Tenth Doctor in Doctor Who, won Outstanding Performer in an Animated Program for his appearances as the droid Huyang in the show.

Retrieved from "https://starwarsfans.fandom.com/wiki/User_blog:Brandon_Rhea/%22The_Clone_Wars%22_Wins_2_Daytime_Emmy_Awards?oldid=19393"
Community content is available under CC-BY-SA unless otherwise noted.