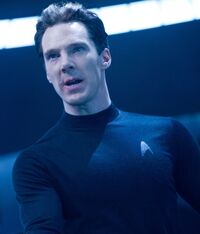 The Internet is abuzz with the rumor that Benedict Cumberbatch will be re-teaming with J.J. Abrams for a role as a villain in Star Wars Episode VII. Rumors about the British actor, who stars as Sherlock Holmes in the BBC series Sherlock and who played Khan Noonien Singh in Abrams’ Star Trek Into Darkness, started swirling over the weekend when when Film Chronicles.com first reported it. Since then, it seems like virtually every site out there (save for the trades) has written about it. We’ve stayed away from it for awhile, but we wanted to bring you a recap on what the Internet is saying.

Before I go any further, I just want to make it clear that we have no special knowledge or even a confirmation about whether Cumberbatch will be in Episode VII. This report is about the rumor itself, not whether Cumberbatch will be in Episode VII. We simply don’t know whether he will or not What we do know is that rumors like this, and how they can spread like wildfire without any clear facts to back them up, are fascinating. It’s a risky game reporting on a rumor when you don’t know for sure if it’s true. If it’s right, you look like a genius with a huge scoop. If it’s wrong, though, it can damage your credibility with your audience.

Here is a timeline of events with this rumor:

Many other sites are reporting on the same information. Is it true? Who knows. There’s no confirmation or denial from Lucasfilm that I know of, and actors’ reps are known to deny deny deny even if a rumor is true (Lucasfilm and Disney would want to announce this on their own)—but at the same time, reps deny rumors when those rumors are just wrong too.

I have no idea if this rumor is true, which is why we haven’t put it forward as a news report or even a rumor that we have confidence in, but I think it would be awesome if it is. Cumberbatch is a great actor who killed it in Star Trek Into Darkness, and I’d love to see him play the new trilogy’s villain. If it is true, we’re likely to find out soon. Filming on Episode VII is expected to film just a few months from now, in January 2014, so we will continue to hear casting rumors and, eventually, confirmations.

As news breaks, be sure to check Fanpedia for all the latest!

Retrieved from "https://starwarsfans.fandom.com/wiki/User_blog:Brandon_Rhea/Benedict_Cumberbatch_Cast_in_Episode_VII%3F_Anatomy_of_a_Rumor?oldid=23128"
Community content is available under CC-BY-SA unless otherwise noted.