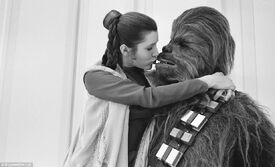 Carrie Fisher helped bring the love story between Princess Leia and Han Solo to life, but if her recent comments are to be taken seriously, she's looking to see some trouble in paradise for the two lovers. Keep in mind that Fisher is notoriously funny, so the odds of these being serious ideas are pretty slim.

In an interview posted on SciFiNow, Fisher says that her ideas shows that "Han Solo and I have been unhappily married for many years, and so we speak through the Wookiees and use a translator." She goes on to say:

"I regularly say to R2 ‘Tell that son of a bitch to ***!’ And we have children, but one of them looks a lot like Chewbacca, and we use Yoda, who’s regenerated on a planet somewhere, for marital therapy. ... There’s also a lot of shopping because there’s cool things to buy and giant planets that are shopping malls. Alderaan means shopping mall by the way. And then I start sleeping with robots, how about that?"

I think it's safe to say that this is a joke, but it's nice to bring some humor into this time of speculation anyway.

Do you have ideas for Star Wars Episode VII? Let us know in the comments below!

Retrieved from "https://starwarsfans.fandom.com/wiki/User_blog:Brandon_Rhea/Carrie_Fisher_Shares_Her_(Probably_Not_Serious)_Episode_VII_Ideas?oldid=21202"
Community content is available under CC-BY-SA unless otherwise noted.