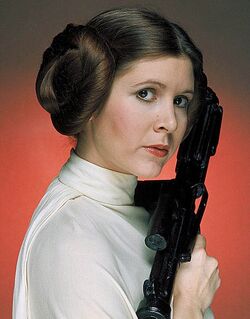 Carrie Fisher has never been one to shy away from sharing her opinions, so you might imagine that the secrecy surrounding Star Wars Episode VII is starting to cramp her style. She wouldn't even comment on the script, telling BBC News, "I would get in trouble no matter how I answer that question." Still, that doesn't mean she can't say anything, so she talked about what it was like to assemble reunite with the original cast on-screen for the first time since 1983.

"It is good to have us all in a room because it's unique. I mean, I don't suppose they have reunions for the Gone With the Wind gang." She joked, "I think people should be forced to do it 30 years on, classic films that they had, either to make another film or put together an anecdote." And after 30 years, Fisher joked that she and all of the original stars "look a little melted."

Now that they've reunited for another adventure, Fisher's goal is to do the character justice and "get Princess Leia right this time." Specifically, she wants to make Leia "less British. I looked a little pretentious faking the accent."

She also joked she wanted to revisit the famous bunned hairstyle, saying "That hairdo can never really be repeated without gales of laughter. I've begged them to put the hair back on in grey and just catch me cooking with the hair, like Granny Leia."

Retrieved from "https://starwarsfans.fandom.com/wiki/User_blog:Brandon_Rhea/Carrie_Fisher_Wants_to_%22Get_Leia_Right%22?oldid=64508"
Community content is available under CC-BY-SA unless otherwise noted.