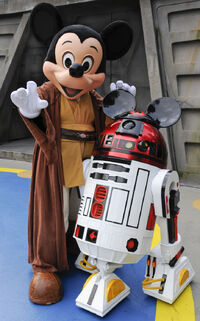 The Walt Disney Company announced today that this year's annual D23 Expo will feature Star Wars for the first time. According to the information provide by Disney:

"For the first time at the D23 Expo, Star Wars fans can have access to experiences created for them by Lucasfilm and Disney. Darth Vader: The Evolution of a Villain, located in the DCP pavilion, showcases the development of the iconic villain from early concepts to striking realization. Crash Course in the Force: Star Wars Saga 101, presented by Lucasfilm’s resident authority Pablo Hidalgo in Stage 23, will give Star Wars newbies and experts alike a thorough grounding in all matters of the Force and the Star Wars legacy."

Might we see some Star Wars surprises too? It's long been rumored that Disney would want to use a big event to reveal the return of Mark Hamill, Harrison Ford, and Carrie Fisher for Star Wars Episode VII. It's possible we could see that at D23.

Are you headed out to D23 in Anaheim? Let us know in the comments below!

Retrieved from "https://starwarsfans.fandom.com/wiki/User_blog:Brandon_Rhea/Disney%27s_D23_Expo_to_Feature_Star_Wars_Experience?oldid=21471"
Community content is available under CC-BY-SA unless otherwise noted.