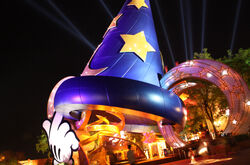 Two weeks ago, we reported that Walt Disney World in Florida would be building a new area in Hollywood Studios called Star Wars Land. The scoops from Theme Park Insider and TheForce.Net suggested that existing structures in Hollywood Studios, such as the Muppet theater and the Backlot Tour, would be taken down in order to make room for this rumored Star Wars Land, as well as the rumored Cars Land.

Now, the Orlando Business Journal is reporting that Star Wars Land could be the largest Disney expansion in recent years. The expansion could easily come with a price tag of more than $200 million. The report also said that, rather than waiting to open Star Wars Land until the whole expansion is completed, Disney would prefer to open each new area and attraction once they're completed. Disney apparently doesn't want other parks, like the Wizarding World of Harry Potter at the nearby Universal Studios, to get too far ahead of them.

There has yet to be an official confirmation or any reports about what might be in Star Wars Land, but we will continue to follow and report on all the latest developments.

Retrieved from "https://starwarsfans.fandom.com/wiki/User_blog:Brandon_Rhea/Disney%27s_Star_Wars_Land_Will_Be_a_Big_Expansion?oldid=19839"
Community content is available under CC-BY-SA unless otherwise noted.