The Force is strong with this couple.

Photographer Steven Kowalski captured and then edited this epic photograph of two newlyweds, John and Mindy Doychich, preparing to do battle against AT-ATs and the Death Star. Check out the shot below, which was posted on Reddit: 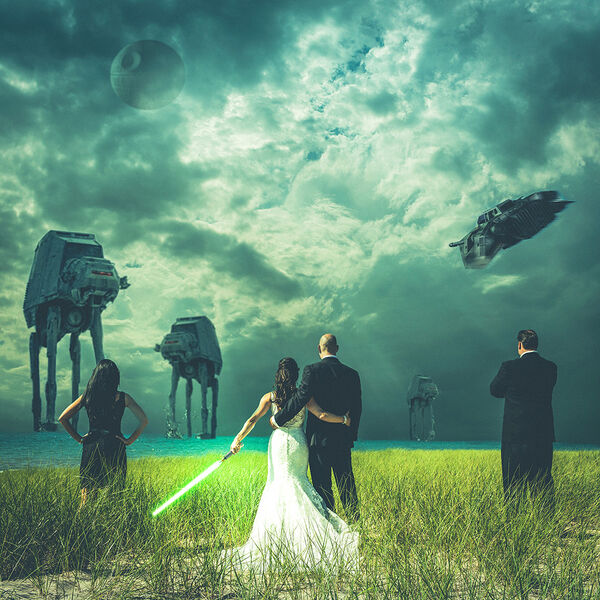 Kowalski talked to The Huffington Post's HuffPost Weddings about the photo and that he and the newlyweds "are into "anything nerdy" like Doctor Who and Star Wars." The cake at the wedding was even Boba Fett-shaped. He said the idea came about once he realized that the couple had a replica of Luke Skywalker's lightsaber from Star Wars Episode VI: Return of the Jedi.

"They had mentioned wanting to do something different," Kowalski said. "I had the idea for them to be looking up at an epic battle." To make that happen, they shot the photo on the shores of Lake Michigan. Editing it took between six and seven hours.

Congratulations to the newlyweds, and may the Force be with them!

Retrieved from "https://starwarsfans.fandom.com/wiki/User_blog:Brandon_Rhea/Epic_Star_Wars_Wedding_Photo?oldid=21660"
Community content is available under CC-BY-SA unless otherwise noted.