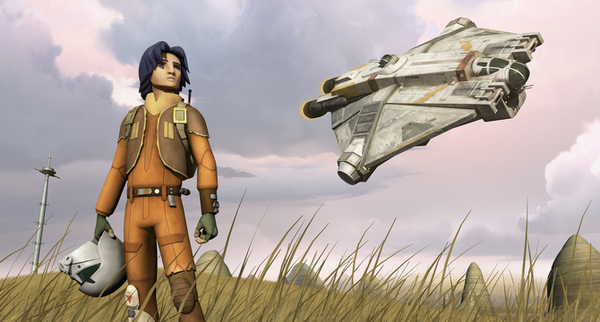 Fresh off the release of the final episodes of Star Wars: The Clone Wars, the show's supervising director spoke to the LA Times about his next Star Wars adventure: Star Wars Rebels, which he is executive producing along with Simon Kinberg and Greg Weisman. The eagerly anticipated show is set between the events of Star Wars Episode III: Revenge of the Sith and Star Wars Episode IV: A New Hope, in a time when the Galactic Empire is consolidating its rule and the Jedi Knights are being hunted to extinction. It will also be the first Star Wars release that George Lucas is not involved in, which has made some fans a bit nervous—but Filoni has said that there aren't many differences between the Lucas and post-Lucas eras, and that his teachings still apply.

But given that The Clone Wars and Rebels take place in two very different time periods, fans should expect the new show to be different from The Clone Wars. For one, instead of dealing with stories across the galaxy, it will keep its focus on the crew of the Ghost, a group of heroes from Lothal rebelling against the Empire, leading to the formation of the Rebel Alliance. The politics that helped define the fall of the Republic in the prequel trilogy and The Clone Wars will also take a backseat.

"In 'Rebels,'" Filoni says, "you'll be in scenarios where you hear things have taken place that are furthering the story, but you won't be watching those politics unfold. It's on a more human level." This marks a return to the feel of the original trilogy, which inspired this series and where politics were mentioned but rarely seen. Take, for instance, the scene in which Grand Moff Tarkin says Emperor Palpatine has dissolved the Senate and swept away the last traces of the Old Republic. We never saw that happen, we only heard about it.

The fast-paced lightsaber battles and big Force powers will also be more limited in this series. Filoni said, "I think that we all agree what we liked about the Force in the original films was it was a less-is more scenario." This makes sense too; in an era where the Jedi are being hunted to extinction, the survivors of Order 66 won't be as quick to use their lightsabers or the Force as they might have been during the prequel era.

Above all, from the art direction to the stories, Filoni wants older fans to really feel like this is the Star Wars they knew and loved as kids, while at the same time wanting new fans and young kids to experience it the way that he and others saw A New Hope. Knowing that, he is keenly aware of his role in the legacy of Star Wars and how he will carry George Lucas' torch forward. "I'm definitely the spokesman for the 'Star Wars' legacy side of things," Filoni said.

What do you think about having less politics, less lightsabers, and less Force powers? Share your thoughts in the comments below!

Retrieved from "https://starwarsfans.fandom.com/wiki/User_blog:Brandon_Rhea/Filoni:_%27Rebels%27_Will_Have_Less_Politics,_More_Humanity?oldid=32682"
Community content is available under CC-BY-SA unless otherwise noted.