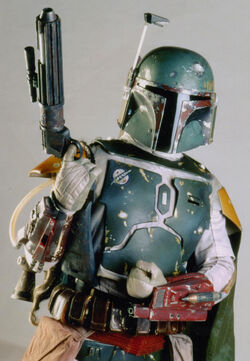 "Yes, he does. I have been in meetings with George where he confirms that Fett survived. If it comes from George then it's true!"

Unless a new story or film changes that, then Rinzler's comments mean that Boba's escape, which has long been true in the now-non-canon Expanded Universe, can be considered official George Lucas canon.

Do you think Boba should still be alive after Return of the Jedi? Share your thoughts in the comments below!

UPDATE: To be completely clear, we can't treat this as ONE HUNDRED percent official until we see it in an official source. George Lucas can say what he wants, but it wasn't on-screen so Disney and Lucasfilm can still say whatever they want. However, in George Lucas' mind, Boba survived. Whether that makes it into the new canon...

Retrieved from "https://starwarsfans.fandom.com/wiki/User_blog:Brandon_Rhea/George_Lucas_Says_Boba_Fett_Survived_Return_of_the_Jedi?oldid=65186"
Community content is available under CC-BY-SA unless otherwise noted.