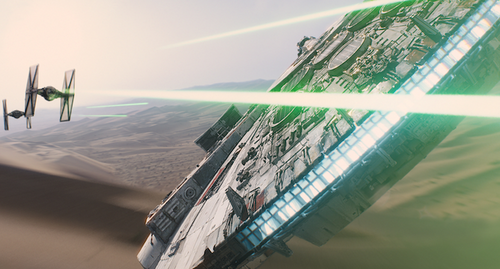 This post contains rumors for Episode VII and therefore may contain SPOILERS!

Yesterday, we revealed that Oscar Isaac's character in Star Wars: The Force Awakens is an X-wing pilot captured by the Empire after attempting to stop Imperial forces from launching a devastating an attack on a desert village. While in the Imperial brig, he meets John Boyega's character, a stormtrooper who objects to what the Empire is doing and disobeys orders. The two launch a daring escape and encounter Daisy Ridley's character.

But what happens next? We can exclusively report...

Daisy's character—who we'll just call Daisy to make things easier—helps her new friends secure safe passage off of the planet. She knows someone who can do that, someone who can help them avoid any... Imperial entanglements.

When they meet up with Han, Daisy shows him the lightsaber, which he recognizes as the lightsaber of Luke Skywalker—a lightsaber (and, presumably, an old friend) he hasn't seen in many years. Han is concerned about what this means for his old buddy, and takes the trio to the Rebel Alliance leader: Princess Leia Organa. And a couple of familiar droids!

It’s not exactly a happy reunion. Nonetheless, Leia sends the group safely on their way, and they set out to return the lightsaber to Luke—and find out what happened to him.

What happens once—or if?—they find Luke? We can't say for sure yet, but it's something... let's just say... powerful.