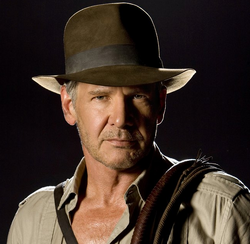 He may not be Han Solo, but he's certainly everyone's other favorite Harrison Ford character.

Speaking to The Telegraph, Harrison Ford said that it's still possible that we could see a fifth Indiana Jones movie, following up from 2008's Indiana Jones and the Kingdom of the Crystal Skull. According to Ford:

"We've seen the character develop and grow over a period of time and it's perfectly appropriate and okay for him to come back again with a great movie around him where he doesn't necessarily have to kick as much ass."

Ford isn't the only older action star who feels that way about an iconic character. It was recently reported that Sylvester Stallone will once again reprise his role as Rocky Balboa in Creed, a spinoff film featuring the grandson of Rocky series character Apollo Creed.

I don't know about you, but I'm not sure how I feel about Indiana Jones returning, even in a more limited capacity. Regardless of how you feel about Kingdom of the Crystal Skull, it did feel like an ending of sorts. You were left with the idea that Indy's son, played by Shia LaBeouf, could pick up the mantle of his father, but Indy himself finally married Marion Ravenwood and seemed ready to settle down. Do we really need to see another adventure after that? I suppose it's possible, but some things are better left finished rather than continued.

What do you think? Was four movies enough, or does Indy have one last adventure in him? Let us know what you think in the comments below!

Retrieved from "https://starwarsfans.fandom.com/wiki/User_blog:Brandon_Rhea/Harrison_Ford_Willing_to_Return_for_Fifth_Indiana_Jones?oldid=22678"
Community content is available under CC-BY-SA unless otherwise noted.