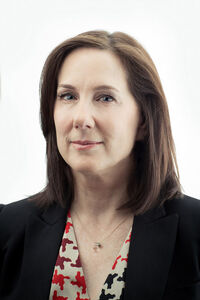 The return of John Williams wasn't the only thing that Kathleen Kennedy made fans happy about today. During her talk at Celebration Europe II, the Lucasfilm President talked briefly about the special effects that will be used in Star Wars Episode VII. Specifically, Kennedy wants to return to the roots of Star Wars's effects:

"Much like many of you, looking at all the Star Wars movies and getting a feeling in what the early films did in combination with real locations and special effects—that's something we're looking very seriously at. We're going to find some really cool locations for Episode VII. We’re going to use ever tool in the toolbox for this movie."

One of the criticisms of the prequel trilogy was its reliance on special effects over practical effects—Revenge of the Sith was shot almost completely in the studio, with no location shooting for the actors—so this may be welcome news for some Star Wars fans. Kennedy further elaborated on the idea behind the film's effects, saying "It's using artwork that you can touch and feel in combination with CG effects."

Perhaps the best quote about it, however, is this: "We know that if we don't have great stories and great characters, then effects mean nothing." For fans who felt that the prequels didn't focus enough on the story, they should be happy to hear this news.

Back in May, Mark Hamill told Kennedy that he wanted to see a better mix of practical effects and CGI. As Hamill said of her response:

"To her credit, she might just be trying to placate me because I'm in the room saying that I want it to have the right balance. She said, 'you know, I've had this very same conversation with George, and I have to remind you that in Jurassic Park, there are only 92 effects shot.' Everything else are puppets, giant T-Rex, you know. That's remarkable."

What do you think about the use of special effects in Star Wars Episode VII? Let us know in the comments below!

Note: Transcript from StarWars.com
Retrieved from "https://starwarsfans.fandom.com/wiki/User_blog:Brandon_Rhea/Kennedy:_Special_Effects_Mean_Nothing_Without_a_Good_Story?oldid=22073"
Community content is available under CC-BY-SA unless otherwise noted.