Review: Heir to the Jedi

WARNING: Major plot spoilers for both Heir to the Jedi and Star Wars Rebels follow. 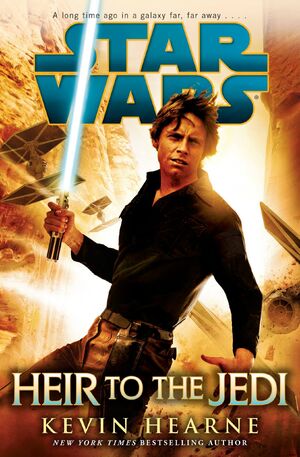 The new era of Star Wars canon is an exciting time for many fans, myself included. I never read many Legends (Expanded Universe) books, so, to me, we're seeing the advent of a whole new era for Star Wars and the release of so many untold stories. Between the fun adventure of A New Dawn and the psychological exploration of Tarkin, not to mention the spectacular Star Wars Rebels and the exciting new comics from Marvel, the future is very bright.

Not every story will be great, though, and Heir to the Jedi is, unfortunately, the first canon misstep. It's certainly not that bad by any means, don't get me wrong, and it has plenty of enjoyable moments, but it lands flat and doesn't feel like much has been added to the canonical saga by the end.

I first became concerned about the novel, written by Star Wars newcomer Kevin Hearne, when I read the excerpt from the Del Rey Sampler this past summer. The excerpt is from the first chapter of the novel, and I thought the first person perspective—this novel is told entirely from Luke Skywalker's first person point of view—fell flat. It felt like some sort of journal that Luke might have written, rather than his immediate thoughts. The dialogue felt awkward at times, particularly in the beginning, but that's not too surprising. When a novel is told from only one character's point of view, authors sometimes need to reply more on dialogue, particularly exposition, in order to convey what other characters are thinking and feeling.

Here is the official synopsis:

Luke Skywalker's game-changing destruction of the Death Star has made him not only a hero of the Rebel Alliance but a valuable asset in the ongoing battle against the Empire. Though he's a long way from mastering the power of the Force, there's no denying his phenomenal skills as a pilot—and in the eyes of Rebel leaders Princess Leia Organa and Admiral Ackbar, there's no one better qualified to carry out a daring rescue mission crucial to the Alliance cause.

A brilliant alien cryptographer renowned for her ability to breach even the most advanced communications systems is being detained by Imperial agents determined to exploit her exceptional talents for the Empire's purposes. But the prospective spy's sympathies lie with the Rebels, and she's willing to join their effort in exchange for being reunited with her family. It's an opportunity to gain a critical edge against the Empire that's too precious to pass up. It's also a job that demands the element of surprise. So Luke and the ever-resourceful droid R2-D2 swap their trusty X-wing fighter for a sleek space yacht piloted by brash recruit Nakari Kelen, daughter of a biotech mogul, who's got a score of her own to settle with the Empire.

Challenged by ruthless Imperial bodyguards, death-dealing enemy battleships, merciless bounty hunters, and monstrous brain-eating parasites, Luke plunges head-on into a high-stakes espionage operation that will push his abilities as a Rebel fighter and would-be Jedi to the limit. If ever he needed the wisdom of Obi-Wan Kenobi to shepherd him through danger, it's now. But Luke will have to rely on himself, his friends, and his own burgeoning relationship with the Force to survive.

My biggest issues have to do with the plot. For one, it doesn't feel like something important has been accomplished. It's a very small scope with relatively minor stakes. On the one hand, that's a very good thing. The Expanded Universe mythology got way too big in both size and scope, which was why it had to be de-canonized. There should be smaller stakes in an era confined between films, but the story should still make the reader feel invested in the hero's victory. The most this novel accomplishes in the way of long-term effects leading into the films is Luke's first telekinetic use of the Force. That's certainly an important moment for the character, but is it a fulfilling ending for a novel? I felt underwhelmed, though I am intrigued at where Luke's initial training stories will go before he is sent to Yoda on Dagobah. So, I suppose that's something.

The other big issue is a MAJOR SPOILER, so consider yourself warned.

I enjoyed the character Nakari. She was strong and capable, exactly as a female character should be written (as opposed to a damsel in distress), and she easily joined the ranks of great Star Wars women. She's a crack shot and even once killed a krayt dragon. So what was the issue? She died for no other reason than to serve the story of the main male protagonist. This is a classic trope, one that was used a lot in earlier Legends stories, but it's a trope that needs to die. Nakari didn't need to die for Luke's story to work or move forward, nor for that matter did the romance between them need to happen. I generally prefer to see male and female characters as friends or colleagues, rather than making every female character someone's love interest, unless the two characters are ultimately going to end up together for good. And in the end, her death is meaningless, and we've been deprived of a potentially great recurring character. The new canon books need to start world building, and that can't be accomplished as effectively if good characters, particularly strong women who are largely absent from Star Wars canon, are simply killed just to further the story of the main characters.

If the reasoning is "the character has to die because they're not in the films" then I point you no further than Ahsoka Tano. Not only did she, a non-film character, defy expectations and survive The Clone Wars, she survived for years after The Clone Wars and is now a recurring character on the upcoming second season of Star Wars Rebels as one of the early leaders of what will one day become the Rebel Alliance. The palpable excitement that her return generated had nothing to do with whether she had appeared in one of the films. Getting around the films can clearly work.

But none of that is to say that I had a problem with everything. You can still enjoy parts of a work, even most of it, in spite of glaring flaws. We just need to speak up at problematic parts and let authors and publishers know that unfortunate tropes and trends need to end.

So, what were some of my favorite parts? We saw multiple different worlds, which is a nice change of pace after the largely confined A New Dawn and first season of Star Wars Rebels. Luke and Nakari made a good team (another reason why her death was such a shame) and Nakari was a well-written character. The book was also pretty funny at times. Even Luke, whose character Hearne writes fairly well, is shown to be funny, which is a nice change of pace considering authors often understandably write him very seriously.

Probably my absolute favorite part was when Luke heard about some of his father's exploits during the Clone Wars. He hears about the great things his father did, and it's the first time, chronologically, that Luke hears about him from anyone other than Obi-Wan. Luke is building, in his head, an even greater image of the hero he believed Anakin Skywalker was. Between this and Marvel's Star Wars comic, where Luke will continue to learn more about Anakin, it seems that Lucasfilm is trying to build up the emotions of "I am your father" more than they already have been. I am very interested to see where this story thread goes.

Heir to the Jedi has its moments and is enjoyable enough in spite of its flaws, but ultimately feels like an unnecessary addition to the saga. What could have been the start of a strong recurring female character instead ends with an unfortunate and classic trope, one that Star Wars would do well to avoid in the future. I tepidly recommend the book in spite of its flaws due to its canonical status (if it's official, then I'm a sucker for it), and because there are fun and adventurous moments with hints of set up for the Marvel comic stories.