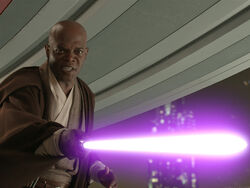 Samuel L. Jackson, who played Jedi Master Mace Windu in all three films of the Star Wars prequel trilogy, has never made it a secret that he wants to be in Star Wars. When Star Wars Episode I: The Phantom Menace was in pre-production, Jackson told George Lucas that he wanted to be in the film, even if it was just as a stormtrooper. Though he eventually became Mace Windu and played the character's death in Star Wars Episode III: Revenge of the Sith, Jackson is ready for more. In an appearance on The Graham Norton Show in the United Kingdom, Jackson said:

"I want to be in Star Wars now too, in J.J's Star Wars. I mean, come on. Jedi fall from incredible heights and a lot of them have lived with one hand. I think I could handle it."

Comedian Nick Frost, also a guest on the show, said Jedi "could just come back to life" by having their midi-chlorians reform, which Jackson agreed with. "They're Jedi!" he exclaimed.

Here is a clip from Jackson's appearance on the show, in which he talks about how he got his signature purple lightsaber in Star Wars Episode II: Attack of the Clones:

Do you want to see Mace Windu in Star Wars Episode VII? Let us know in the comments below!

Retrieved from "https://starwarsfans.fandom.com/wiki/User_blog:Brandon_Rhea/Samuel_L._Jackson_wants_to_be_in_Episode_VII?oldid=20920"
Community content is available under CC-BY-SA unless otherwise noted.