Win a Chance to Be in Episode VII 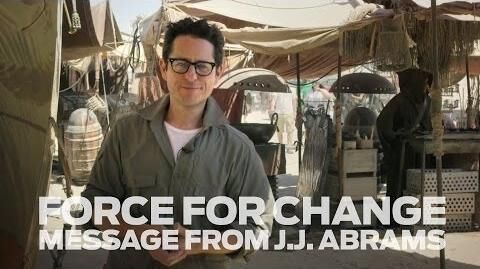 Lucasfilm is giving lucky fans an incredible opportunity: to win a chance to be in Star Wars Episode VII, and get a tour of the set and meet the cast at Pinewood Studios in London. The opportunity was announced via video by director J.J. Abrams, who is currently on location filming in Abu Dhabi.

The contest is for a new initiative called Force for Change, which will raise funds for UNICEF's Innovation Labs and help children all around the world. Disney has committed $1 million to Force for Change, and fans can donate as little as $10 to win a chance for the Episode VII experience. The campaign runs from May 21st through July 18th, and entering means you are helping children in need from all across the globe.

The grand prize includes, via Lucasfilm:

Don't miss this once in a lifetime opportunity. Donate now to help kids in need, and win a chance to get a peek at the next chapter of the Star Wars Saga!